We're home, and all is well! 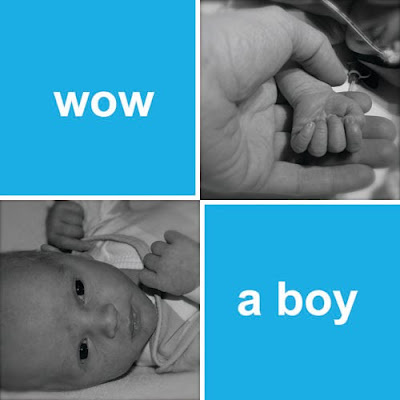 Yes, it IS a boy! He was born on March 4th, at 36w1d. A very respectable term, considering all that's been happening with this pregnancy the past couple of months. We never expected to get this far!

It was a very speedy birth: exactly 4 hours and 5 minutes from the first contraction till the moment they handed him to me all covered in blood and goo. We only narrowly avoided a c-section, since his head was tilted the wrong way and he started to show signs of distress. Same as with the twins, but this time there was only one baby, and it was all going so fast that they decided a natural birth might get him out quicker than a c-section. That is, with the assistance of a very scary pair of scissors and the gyn putting all his weight on my belly to help push him out. And out he came!

All was well right after birth, his apgar scores were (almost) perfect, his weight was good for his term, and he was allowed to stay with me the whole time. No rushing off to the NICU, no taking him away for testing. He was just there. On my belly. Where he was supposed to be. It was perfect! It was everything I didn't dare dream of or hope for...

They moved us to a private room, where we could hold him and look at him and cuddle him as much as we wanted. No glass cage, no alarms, no nurses rushing into the room every so many minutes. Just us.

His big brother and sister came to visit with grandma when he was just 3 hours old. They gave him careful little kisses and said his name and he instantly belonged with them. We were a family. For one day and one night, everything was perfect!

And then the next day things started to go downhill. We thought 36 weeks was perfect. Only one week short of 37 weeks, that's almost full term, isn't it? Wrong. 40 weeks is full term. Anything short of that means there's a chance the baby is just not quite ready to be born. A lot of times, 36 weekers do just fine. But there's just as many 36 weekers that struggle. And ours struggled. Nowhere near as much as his brother and sister did, but he struggled nonetheless.

When he was a day old, he stopped drinking (we'd been cupfeeding him because they needed to run glucose tests the first 24 hours, so just practising breastfeeding wasn't enough, he had to drink 15 cc's every 3 hours). He would let us pour milk in his mouth, but he just wouldn't swallow. He missed 3 feedings in a row. It's not that he was sick, he was just too tired. He did everything he needed to do: he kept his temperature stable, he passed the glucose tests, his saturation was great, his breathing stable. He just didn't have any energy left to feed himself. All he had the energy for was sleep. Oh, and he was turning yellow, fast.

And so on the second day the neonatology-pediatrician came in and told us he needed to be admitted to the high-care nursery where they would put in a feeding tube so they could give him enough fluids to help him get rid of the waste-products that were turning him yellow. They would run some tests to check his liver values and he might need to be put under a uv-light.

Nothing major. Nothing scary. No brainbleeds, no breathing problems, no life threatening complications, no NICU. But there I was again, alone, like I was 2 years before. And all the emotions from that first time, that I'd stuffed away somewhere deep inside, came flooding back up. Together with all the fears that had surrounded this pregnancy. He wasn't sick, he wasn't even that premature, he was just tired. And so was I...

Long story short: the next 3 days he spent sleeping. And sleeping. And sleeping. Being fed through the feeding tube meant he didn't need to waste energy trying to feed himself. He could just sleep. And sleep. And sleep more. In those 3 days, he was awake maybe 4 or 5 times, and only for a couple of minutes each time. He was so tired. When he was 3 days old, his liver values shot up, and they put him under a uv-lamp for 24 hours. And that did the trick. The next day he started waking for his feedings, and he started drinking again. He would take the breast for a couple of minutes every other feeding. And he'd drink. Just like that.

And as soon as he'd gone downhill just a couple of days earlier, he went uphill from there. It was amazing to see his little eyes open, to see his personality emerge from that deep sleep he'd been in. And before we knew it, we were going home. Together! We were both discharged exactly a week (and 3 hours) after his birth.

He was feeding himself. He was growing again. He was still sleeping a lot. But he was fine. He IS fine. He's HEALTHY. He's wonderful. He's PERFECT!!!

And all has been well since... 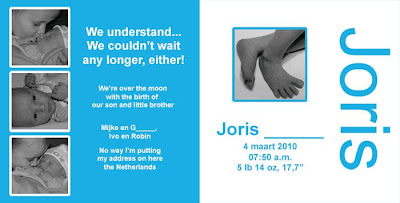